Description: This tutorial extends the connection of IoT devices connecting to FIWARE to use alternate transport. The UltraLight 2.0 IoT Agent created in the previous tutorial is reconfigured to communicate with a set of dummy IoT devices which transfer secure messages over the IOTA Tangle. An additional gateway component is added to the architecture of the previous MQTT tutorial to allow for secure indelible transactions across a distributed ledger network.

The tutorial is mainly concerned with the architecture of the custom components, but uses cUrl commands where necessary, and is also available as Postman documentation

“Hansel took his little sister by the hand, and followed the pebbles which shone like newly-coined silver pieces, and showed them the way.”

The IOTA Tangle is a directed acyclic graph which can be used as a distributed ledger. It is not a traditional blockchain, but works with the concept of a Tangle which contains the current transaction history and links from parents to child transactions which provide a single source of truth in a distributed network. Whenever information is persisted to the tangle it is replicated across all nodes so that any client, anywhere around the world can send valid transactions to a Node.

IOTA positions itself as being an ideal distributed ledger for IoT due to its feeless nature and scalable distributed structure. Obviously when architecting any smart system, the developer needs to compromise between various factors such as price, speed, reliability, security and so on. The previous MQTT tutorial was fast, but contained no security elements and was vulnerable to malicious attack. An IOTA-based IoT system will automatically include secure logging of all events and therefore could be used to for charging customers on an event-by-event basis.

For the purpose of this tutorial, all data from the dummy devices is being stored within the IOTA Tangle. Each device reading will be placed in a transaction object and attached to the IOTA Tangle, once attached it cannot be changed and is immutable. It obviously takes time for all nodes to agree that a transaction hs occurred, and therefore all communication should be considered as asynchronous.

The IoT Agent for Ultralight currently offers three standard transport mechanisms - HTTP, MQTT and AMPQ. Whereas it would be possible to create a new binding directly for IOTA, in this case, it makes more sense to re-use the existing asynchronous MQTT binding and extend using a gateway solution where a separate microservice deals with the IOTA messages. IoT Agents based on gateway solutions already exist for OPC-UA and LoRaWAN. In the case of the IoT Agent for OPC-UA for example, in its own Tutorial, device readings are passed to an OPC-UA server and the IoT Agent in turn subscribes to the OPC-UA server and transforms messages into NGSI format. With the Gateway solution described in this tutorial effectively MQTT is now just being used as a message bus, so we can provision our IoT devices as MQTT devices and intercept the relevant MQTT topics to transform the data into IOTA Tangle transactions to talk to IOTA Tangle enabled devices. The payload of each message continues to use the existing UltraLight 2.0 syntax, and therefore we can continue to use the same FIWARE generic enabler to connect the devices. It is merely the underlying transport which has been customized in this scenario.

Mosquitto is a readily available, open source MQTT broker which will be used during this tutorial. It is available licensed under EPL/EDL. More information can be found at https://mosquitto.org/

For the purpose of this tutorial, a series of dummy IoT devices have been created, which will be attached to the context broker. Details of the architecture and protocol used can be found in the IoT Sensors tutorial The state of each device can be seen on the UltraLight device monitor web page found at: http://localhost:3000/device/monitor 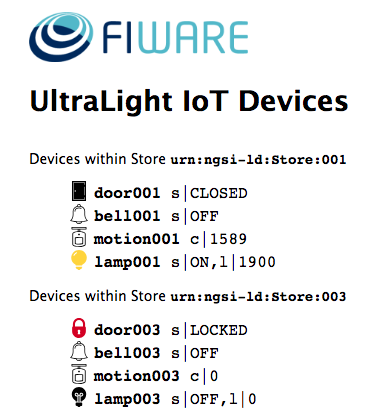 This application builds on the components created in previous tutorials. It will make use of two FIWARE components - the Orion Context Broker and the IoT Agent for UltraLight 2.0. Usage of the Orion Context Broker is sufficient for an application to qualify as “Powered by FIWARE”. Both the Orion Context Broker and the IoT Agent rely on open source MongoDB technology to keep persistence of the information they hold. We will also be using the dummy IoT devices created in the previous tutorial Additionally we will add an instance of the Mosquitto MQTT broker which is open source and available under the EPL/EDL and create a custom MQTT-IOTA Gateway to enable us to persist commands to the IOTA Tangle and to subscribe to topics to receive measurements and command acknowledgements when they occur.

Therefore, the overall architecture will consist of the following elements:

Since all interactions between the elements are initiated by HTTP or MQTT requests over TCP, the entities can be containerized and run from exposed ports. 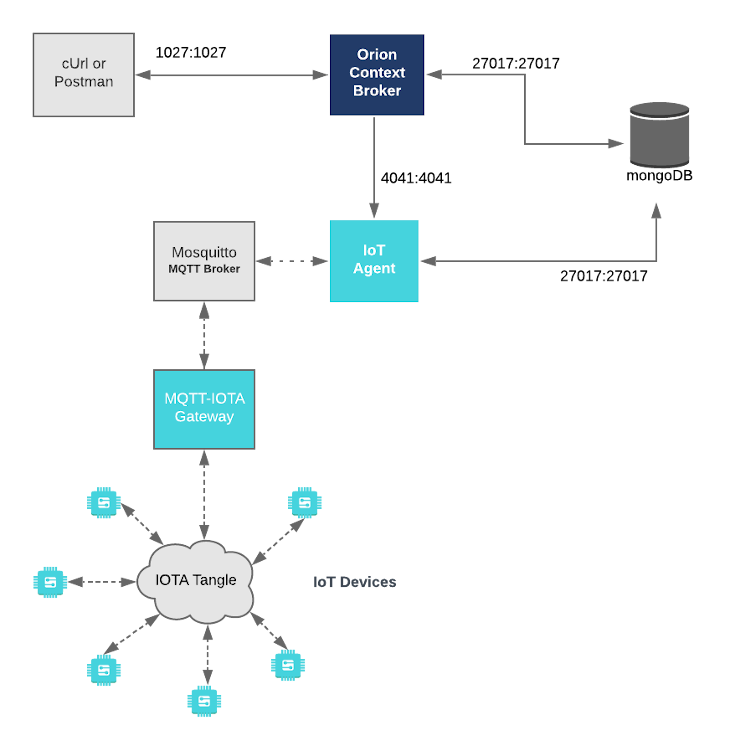 The necessary configuration information for wiring up the Mosquitto MQTT Broker, the IoT devices and the IoT Agent can be seen in the services section of the associated docker-compose.yml file:

The mosquitto container is listening on two ports:

The attached volume is a configuration file used to increase the debug level of the MQTT Message Broker.

The tutorial container is listening on two ports:

The tutorial container is driven by environment variables as shown:

The other tutorial container configuration values described in the YAML file are not used in this tutorial.

The IoT Agent for UltraLight 2.0 can be instantiated within a Docker container. An official Docker image is available from Docker Hub tagged fiware/iotagent-ul. The necessary configuration can be seen below:

The iot-agent container relies on the presence of the Orion Context Broker and uses a MongoDB database to hold device information such as device URLs and Keys. The container is listening on a single port:

The iot-agent container is driven by environment variables as shown:

As you can see, use of the MQTT transport is driven by only two environment variables IOTA_MQTT_HOST and IOTA_MQTT_PORT

Before you start you should ensure that you have obtained or built the necessary Docker images locally. Please clone the repository and create the necessary images by running the commands as shown:

Thereafter, all services can be initialized from the command-line by running the services Bash script provided within the repository:

:information_source: Note: If you want to clean up and start over again you can do so with the following command:

Provisioning devices is not the focus of this tutorial, and all the necessary device provisioning occurs automatically when the tutorial is started. However, for completeness the provisioning requests are repeated here and described below. It is not necessary to re-run these commands.

A series of service groups are created to associate classes of devices to an API Key, in the example below services have been created for type=Bell and type=Motion. It should be noted that the resource attribute has been left blank and the transport set to MQTT - this is the same as the in the previous MQTT tutorial, since the IoT Agent is merely sending messsages to the MQTT broker and has no idea that a custom gateway component is also involved.

Commands and measures defined when individual devices are provisioned. Once again the transport is set to MQTT.

The device monitor can be found at: http://localhost:3000/device/monitor - open the web page to view the state of the devices and view the persisted IOTA Tangle traffic.

Open a new terminal, and follow the iota-gateway Docker container as follows:

The terminal will then be ready to display received messages.

If the MQTT-IOTA Gateway is functioning correctly, the following messages should be displayed

The gateway needs to subscribe to the IOTA Tangle to receive measures and command acknowledgements.

A sensor sending northbound measurements will persist transactions to the IOTA Tangle to which will be passed on to any subscriber than wants them. The sensor does not need to make a connection to the subscriber directly. Similarly, any connected actuators will need to subscribe to an IOTA Tangle message topic to receive aby commands that are relevant to them.

Open a new terminal, and run a fiware-tutorial Docker container to send a message as follows:

The terminal will then be ready to display received messages.

If the Devices are functioning correctly, the message should be received in the other terminal:

Using the IOTA Tangle as a Transport

Since all the devices have been pre-provisioned, a bell can be rung using a standard NGSI-v2 PATCH request:

The NGSI request is transformed into an MQTT message (with an Ultralight payload) which is received by the MQTT-IOTA Gateway - this message is then persisted to the IOTA Tangle as shown:

The dummy device is also subscribing to IOTA Tangle messages, a message is received and the device is activated (in this case the bell will ring). At this point an acknowledgement is placed onto the fiware/cmdexe topic:

If you are viewing the device monitor page, you can also see the state of the bell change.

The Gateway receives the acknowledgement from the IOTA Tangle fiware/cmdexe topic and returns the result of the request to the IoT Agent.

The result of the command to ring the bell can be read by querying the entity within the Orion Context Broker.

The TimeInstant shows last the time any command associated with the entity has been invoked. The result of ring command can be seen in the value of the ring_info attribute.

Note: IOTA Transactions are not instantaneous, if the bell is queried before the transaction is complete, the response will leave the ring_status as PENDING 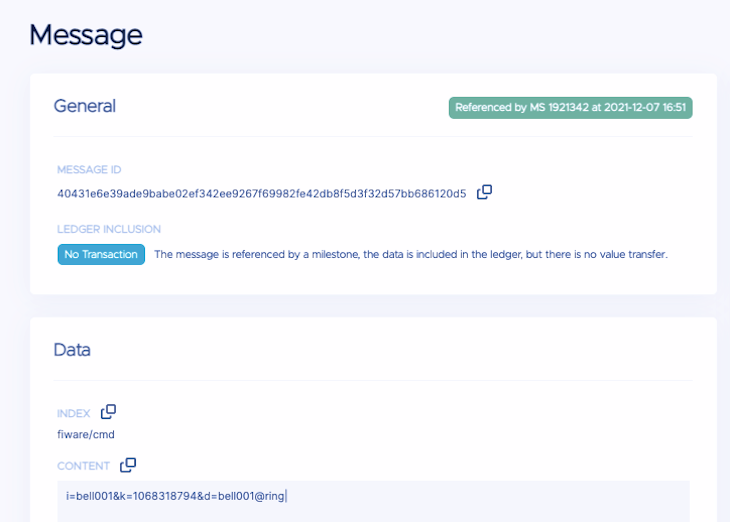 Which indicates a request was sent to ring the bell.

A measure from a device can be simulated by selecting Detect Motion from the dropdown and clicking on send.

The device persists the measure to the fiware/attrs topic on the IOTA Tangle Mainnet.

Once the transactions is settled, it is passed onto the subscribing Gateway component.

The state of the sensor can be read by querying the entity within the Orion Context Broker.

The MQTT-IOTA Gateway is a simple application written in Node.js. Its only function is passing data between the two transports. MQTT Client libraries already exist so the application can be set up to listen to the normal MQTT topic for IoT Agent actuations.

Similarly, there are equivalent client libraries available in multiple languages for persisting and listening to changes on the IOTA Tangle. The MQTT-IOTA Gateway needs to listen on two topics - one for device measures and a second one for acknowledgements of commands:

For the southbound traffic, the API Key and device ID are extracted from the MQTT topic and moved into the IOTA payload. The syntax of the IOTA payload (with i, k and d attributes) is based on the Ultralight HTTP syntax. The message is then persisted to the Tangle using an appropriate index:

Northbound traffic is similar - the payload is received from the IOTA Tangle, unmarshalled to reveal the API Key and device id, and the posted to an appropriate MQTT Topic.

The full code of the MQTT-IOTA Gateway includes additional error handling and asynchronous data handling to defer the execution of a function until the next Event Loop iteration.

The code for a device to connect to the IOTA Tangle is repeated on the device. Actuators must listen to an agreed topic in order to be informed of commands. process.nextTick() can be used to ensure commands are not missed and can be processed when time permits.

For real devices, the callback of a successful actuation should cause an acknowledgement to be sent. Acknowledgements are queued and sent in order. If an error occurs the acknowledgement must be resent or the command will remain in a PENDING state.

Measures are dealt with in a similar manner. The payload is created in Ultralight syntax (including a timestamp) and pushed to a queue. The queue sends the measure to the IOTA Tangle and reschedules any failures.