Description: This tutorial is an introduction to the FIWARE Cosmos Orion Flink Connector, which facilitates Big Data analysis of context data, through an integration with Apache Flink, one of the most popular Big Data platforms. Apache Flink is a framework and distributed processing engine for stateful computations both over unbounded and bounded data streams. Flink has been designed to run in all common cluster environments, perform computations at in-memory speed and at any scale.

The tutorial uses cUrl commands throughout, but is also available as Postman documentation

Smart solutions based on FIWARE are architecturally designed around microservices. They are therefore are designed to scale-up from simple applications (such as the Supermarket tutorial) through to city-wide installations base on a large array of IoT sensors and other context data providers.

The massive amount of data involved enventually becomes too much for a single machine to analyse, process and store, and therefore the work must be delegated to additional distributed services. These distributed systems form the basis of so-called Big Data Analysis. The distribution of tasks allows developers to be able to extract insights from huge data sets which would be too complex to be dealt with using traditional methods. and uncover hidden patterns and correlations.

As we have seen, context data is core to any Smart Solution, and the Context Broker is able to monitor changes of state and raise subscription events as the context changes. For smaller installations, each subscription event can be processed one-by-one by a single receiving endpoint, however as the system grows, another technique will be required to avoid overwhelming the listener, potentially blocking resources and missing updates.

Apache Flink is a Java/Scala based stream-processing framework which enables the delegation of data-flow processes. Therefore additional computational resources can be called upon to deal with data as events arrive. The Cosmos Flink connector allows developers write custom business logic to listen for context data subscription events and then process the flow of the context data. Flink is able to delegate these actions to other workers where they will be acted upon either in sequentiallly or in parallel as required. The data flow processing itself can be arbitrarily complex.

Obviously, in reality, our existing Supermarket scenario is far too small to require the use of a Big Data solution, but will serve as a basis for demonstrating the type of real-time processing which may be required in a larger solution which is processing a continuous stream of context-data events.

This application builds on the components and dummy IoT devices created in previous tutorials. It will make use of three FIWARE components - the Orion Context Broker, the IoT Agent for Ultralight 2.0, and the Cosmos Orion Flink Connector for connecting Orion to an Apache Flink cluster. The Flink cluster itself will consist of a single JobManager master to coordinate execution and a single TaskManager worker to execute the tasks.

Both the Orion Context Broker and the IoT Agent rely on open source MongoDB technology to keep persistence of the information they hold. We will also be using the dummy IoT devices created in the previous tutorial.

Therefore the overall architecture will consist of the following elements:

The overall architecture can be seen below: 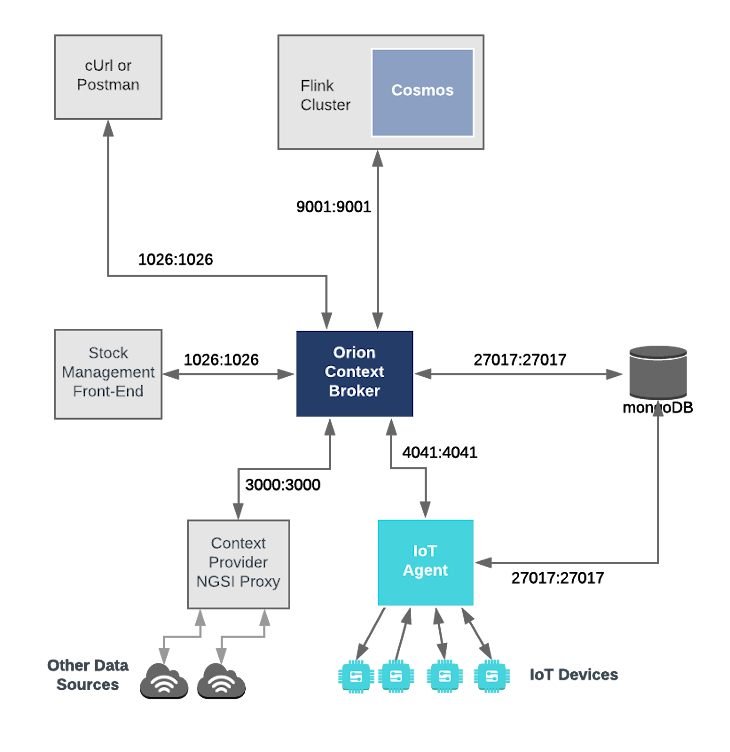 Since all interactions between the elements are initiated by HTTP requests, the entities can be containerized and run from exposed ports.

The configuration information of the Apache Flink cluster can be seen in the jobmanager and taskmanager sections of the associated docker-compose.yml file:

The jobmanager container is listening on three ports:

The taskmanager container is listening on two ports:

The containers within the flink cluster are driven by a single environment variable as shown:

Before you start, you should ensure that you have obtained or built the necessary Docker images locally. Please clone the repository and create the necessary images by running the commands shown below. Note that you might need to run some of the commands as a privileged user:

This command will also import seed data from the previous tutorials and provision the dummy IoT sensors on startup.

To start the system, run the following command:

Note: If you want to clean up and start over again you can do so with the following command:

Dataflow within Apache Flink is defined within the Flink documentation as follows:

When executed, Flink programs are mapped to streaming dataflows, consisting of streams and transformation operators. Each dataflow starts with one or more sources and ends in one or more sinks. The dataflows resemble arbitrary directed acyclic graphs (DAGs). Although special forms of cycles are permitted via iteration constructs, for the most part this can be glossed over this for simplicity."

This means that to create a streaming data flow we must supply the following:

The orion.flink.connector-1.2.4.jar offers both Source and Sink operations. It therefore only remains to write the necessary Scala code to connect the streaming dataflow pipeline operations together. The processing code can be complied into a JAR file which can be uploaded to the flink cluster. Two examples will be detailed below, all the source code for this tutorial can be found within the cosmos-examples directory.

Further Flink processing examples can be found on the Apache Flink site and Flink Connector Examples.

Compiling a JAR file for Flink

An existing pom.xml file has been created which holds the necessary prerequisites to build the examples JAR file

In order to use the Orion Flink Connector we first need to manually install the connector JAR as an artifact using Maven:

Thereafter the source code can be compiled by running the mvn package command within the same directory (cosmos-examples):

Generating a stream of Context Data

For the purpose of this tutorial, we must be monitoring a system in which the context is periodically being updated. The dummy IoT Sensors can be used to do this. Open the device monitor page at http://localhost:3000/device/monitor and unlock a Smart Door and switch on a Smart Lamp. This can be done by selecting an appropriate the command from the drop down list and pressing the send button. The stream of measurements coming from the devices can then be seen on the same page:

The first example makes use of the OrionSource operator in order to receive notifications from the Orion Context Broker. Specifically, the example counts the number notifications that each type of device sends in one minute. You can find the source code of the example in org/fiware/cosmos/tutorial/Logger.scala

An alternative would be to use curl on the command-line as shown:

Once a dynamic context system is up and running (we have deployed the Logger job in the Flink cluster), we need to inform Flink of changes in context.

This is done by making a POST request to the /v2/subscription endpoint of the Orion Context Broker.

If a subscription has been created, we can check to see if it is firing by making a GET request to the /v2/subscriptions endpoint.

Within the notification section of the response, you can see several additional attributes which describe the health of the subscription

The lastNotification should be a recent timestamp - if this is not the case, then the devices are not regularly sending data. Remember to unlock the Smart Door and switch on the Smart Lamp

The lastSuccess should match the lastNotification date - if this is not the case then Cosmos is not receiving the subscription properly. Check that the hostname and port are correct.

Leave the subscription running for one minute, then run the following:

After creating the subscription, the output on the console will be like the following:

The first lines of the program are aimed at importing the necessary dependencies, including the connector. The next step is to create an instance of the OrionSource using the class provided by the connector and to add it to the environment provided by Flink.

The OrionSource constructor accepts a port number (9001) as a parameter. This port is used to listen to the subscription notifications coming from Orion and converted to a DataStream of NgsiEvent objects. The definition of these objects can be found within the Orion-Flink Connector documentation.

The stream processing consists of five separate steps. The first step (flatMap()) is performed in order to put together the entity objects of all the NGSI Events received in a period of time. Thereafter the code iterates over them (with the map() operation) and extracts the desired attributes. In this case, we are interested in the sensor type (Door, Motion, Bell or Lamp).

Within each iteration, we create a custom object with the properties we need: the sensor type and the increment of each notification. For this purpose, we can define a case class as shown:

Therefter can group the created objects by the type of device (keyBy("device")) and perform operations such as timeWindow() and sum() on them.

After the processing, the results are output to the console:

You can run the same package you uploaded to the Flink Web UI specifying the class org.fiware.cosmos.tutorial.LoggerLD. After a minute you can run again the following command to see the output:

After creating the subscription, the output on the console will be like the following:

The second example switches on a lamp when its motion sensor detects movement.

The dataflow stream uses the OrionSource operator in order to receive notifications and filters the input to only respond to motion senseors and then uses the OrionSink to push processed context back to the Context Broker. You can find the source code of the example in org/fiware/cosmos/tutorial/Feedback.scala

Select the running job (if any) and click on Cancel Job

If the previous example has not been run, a new subscription will need to be set up. A narrower subscription can be set up to only trigger a notification when a motion sensor detects movement.

Note: If the previous subscription already exists, this step creating a second narrower Motion-only subscription is unnecessary. There is a filter within the business logic of the scala task itself.

Within any Store, unlock the door and wait. Once the door opens and the Motion sensor is triggered, the lamp will switch on directly

As you can see, the code is similar to the previous example. The main difference is that it writes the processed data back in the Context Broker through the OrionSink.

The arguments of the OrionSinkObject are as follows: